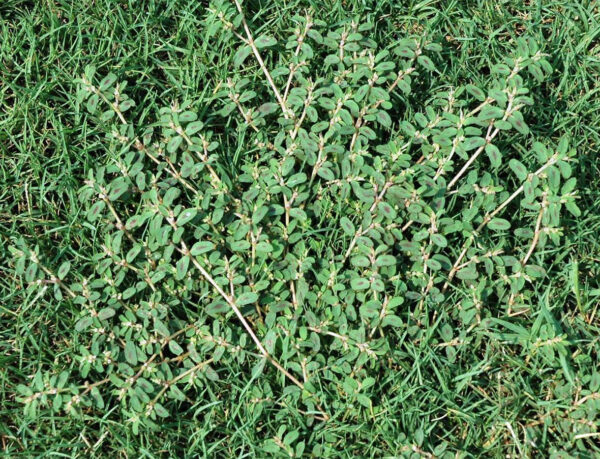 Those two spurges emerge in the summer annually, which means that they become more mature, advanced, or elaborate throughout and during the growing season.

They both produce seeds in late summer to early fall. If you have very low and poor maintenance of your yard or during drought season or poor weed management or poor mulching, these two spurges will flourish.

Both spotted spurge weed and prostrate spurge weed are susceptible to numerous pre-emergent and post-emergent herbicide products. Both spurges can be killed by hand pulling and eliminating, since it can do immediate relief from seeding.

Spurge weed (Euphorbia Maculata) will grow from twelve to fifteen inches tall. During growing stages, spurge weed will form rounded clumps. They can be killed with selective herbicide for spurge weed.

List of selective herbicide for spurge reviews and bestsellers

This spurge weed killer, or spurge herbicide, by Monterey is a post-emergence herbicide formulated to control spurge weed and other weeds such as clover, wild violet, ground ivy, dandelions, oxalis, creeping Charlie, and other broadleaf weeds in residential lawns.

It is a selective herbicide where it must be avoided to provide drift of spray mist to vegetables, flowers, ornamental plants, shrubs, trees, and other desirable plants because it can kill them instead. Do not apply on Carpetgrass, Dichondra, and lawns with clovers.

This spurge weed killer is suitable for controlling both spotted spurge weed and prostate spurge weed from spring or early fall applications during the actively growing weeds. On a tough to kill weeds, you may higher the rate.

This wed killer is a combination of sulfentrazone and triclopyr that can start killing weeds within seven to fourteen days. The Sulfentrazone is a protox inhibitor that prevent a key enzyme required for chlorophyll production.

The application of this herbicide will affects a fast leaf and stem curl, browning, yellowing, and twisting.

The weed killer is an oil-based formula that can penetrate the cuticle of the toughest weeds to kill them. It can be applied during cool weather in the early or later growing season (as low as 50°F).

The product is also suitable for applications up to 85°F. It can get rid of spurge weed in commercial land, landscape, lawn care, golf course, right-of-way, cemetery, and industrial area.

This Dismiss weed killer product is a selective post-emergence herbicide that will control or kill or suppress spurge weed. To apply, you must use it at rates from 4 to 12 fl. oz/acre or 0.092 to 0.275 fl. oz./1,000 square feet.

Avoid exceeding the application rate as specified in the instruction label. It contains the ingredient Sulfentrazone (39,6%).

To apply you must directly spray the spurge weed killer mixture toward the base of the plant. You will fail if you spray over the top of the plant.

This weed killer product is very effective in getting rid of spurge weed when being applied to soil that has no clods and debris. For a maximum result, the filed must be cleaned from leaves or mulch.

For maximum effectiveness, apply this herbicide as a pre-emergent, and the area that would receive treatment should receive at least 0.25 inches of rainfall or water or irrigation after application. This herbicide product can be absorbed into the foliage.

It works by penetrating the root system. This herbicide is well tolerated and gentle on cool or warm-season turfgrasses.

This Triplet SF spurge killer product is a selective herbicide that works as a post-emergent broadleaf herbicide. It is produced in a liquid formulation.

This mix also allows for selective control of broadleaf weeds and perfect for the control of dandelion, clover, spurges, henbit, and other weeds.

It has been proven to consistently act as one of the best spurge weed killer and other weeds such as knotweed, plantain, oxalis, clover, and dandelion. This Surge herbicide contains sulfentrazone, 2,4-D, MCPP-p, and dicamba.

The formulation of the Surge weed killer works by limiting a key enzyme required for chlorophyll production. After the application, the result will be visible within 24 to 48 hours.

In the temperature of up to 90°F, the application can still have its efficiency and speed if used as directed in the Surge weed control label.

This is a selective herbicide for spurge in established cool-season and warm-season turfgrasses, such as bermudagrass, zoysiagrass, centipedegrass, bahiagrass, bluegrass, fescues, perennial ryegrass, bentgrass, and buffalograss. The plant will be killed within 10 to 14 days.

This PBI Gordon herbicide had been proven by professionals and academic groups to offer a fast and great killing of broadleaf weeds. It can kill weeds such as spurge, clover, plantain, and ground ivy.

In a matter of hours, this herbicide product will give visible results. Spurge weed will be eliminated within 7 to 14 days.

This herbicide is effective for getting rid of weeds. This is a broadleaf weed killer and not intended for eliminating the most types of grass families. The label does not include quack grass and will not kill crabgrass in the yard.

This is for post-emergent weeds in cool and warm weather. It would work well if applied in mid-April.

How to get rid of spurge weed?

1. Use a pre-emergent herbicide

Pre-emergent herbicide is intended to prevent weeds before they emerge or bloom. This treatment is crucial if you have previously had a spurge (Euphorbia Maculata) weed problem in your garden.

Timing is everything for most pre-emergents herbicides. They have to be applied before soil temperatures reach 55 degrees in the spring.

This condition is meant so the product to be present when seeds start to germinate. Spurge (Euphorbia Maculata) starts to germinate when the ground reaches 60 degrees.

Apply the pre-emergent herbicide to get rid of spurge weed when the temperature drops below 85 degrees Fahrenheit in the fall.

Apply them before the temperature rises and weed starts to germinate in the spring.

Spurge weed will be killed best to post-emergent weed killer when the spurge weed is still in its young stage. Established spurge weeds are harder to get rid of.

If you do not have the chance on applying a pre-emergent herbicide treatment, you can pull the spurge weed out by hand. This practice is advisable if you only have a little spurge weed.

The most effective way to get rid of spurge weed by hand is by destroying the taproot. The plant has a main root, called the taproot, where stems grow from.

You should always wear a glove because Spurge produces a white sap that is an irritant to eyes and skin when stems are broken! Wear long sleeves and protective eye goggles while pulling!

Wash the rakes, hoes, shovels, that you use to pull spurge weed after you finish. Seeds can be transmitted to other areas of your lawn if you miss doing so.

Throw away your weeds in compostable bags.